A Line of Type
120 Years of Typographic History

Commissioned by Linotype GmbH, work on the book began towards the end of 2005 and was completed just in time to celebrate the 120th anniversary of this great company.

If you cannot read the text on the right side in the image above, don’t wonder: it is written in corean. Yes, this is the first time that a book of mine was translated in a language I cannot understand – but the drawings are still very legible.

From the backcover:
One summer’s day in 1886, the publisher of the New York Herald suddenly exclaimed: “Ottmar, you have cast a Line of Type!” The “line” in question was a hot metal slug that had just been produced by a brand new machine called The Blower. This hissing apparatus, which scooped its type from a boiling pot of lead, was the latest in an endless series of attempts to set type mechanically – and the first one that worked.
After that memorable afternoon in 1886, the machine would be called “Linotype.” Its inventor, a German emigré named Ottmar Mergenthaler, has been recognized as one of the genius inventors of the 19th century.

Today, it is hard to imagine what a sensation the Linotype caused; few people realize what landslide changes Mergenthaler’s invention brought to written communication. That’s because it was 120 years ago, and so many things have happened since. To mention a few: the Improved Linotype, the erection of the Eiffel Tower, the first World War, surrealism, the puppet shows and type designs of W.A. Dwiggins, Times New Roman, World War Two, the careers of Hermann Zapf and Adrian Frutiger, the coming of Helvetica, the Cold War, James Bond, the advent of photo-typesetting, the death of photo-typesetting, the May 1968 uprising, the advent of laserfonts, the death of laserfonts, the advent of PostScript, the death of… well no, not just yet. And finally in 2006, Linotype’s jubilee year, the friendly takeover of the company by its old competitor, Monotype Imaging.

All of this and more is discussed in the present book. Is it possible to tell so many compelling stories in one volume that barely surpasses 100 pages? Alessio Leonardi, the Italo-Berlinese designer and raconteur, thought it shouldn’t be a problem. Jan Middendorp, the Dutch-Berlinese type writer and page maker, was skeptical but took part nevertheless.

And Linotype realized that, now that the money had been spent, they had no choice but to publish it under their Mergenthaler imprint. Lavishly illustrated – in glorious black and white.

Here some images from inside the book. 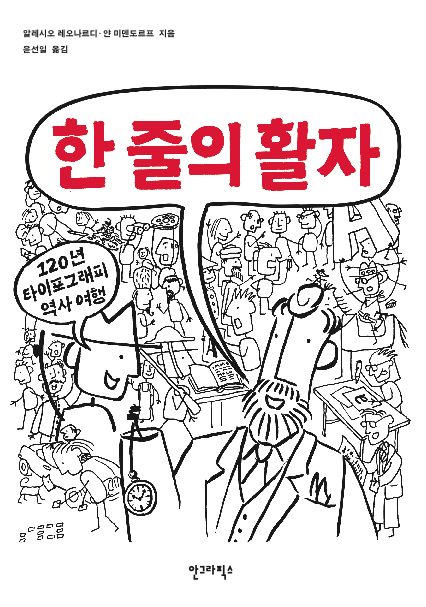 by Alessio Leonardi
& Jan Middendorp
ag Books,
Seul, Corea
168 pages in full B&W
More than 100 drawings
and a lot of written words
that I cannot read. 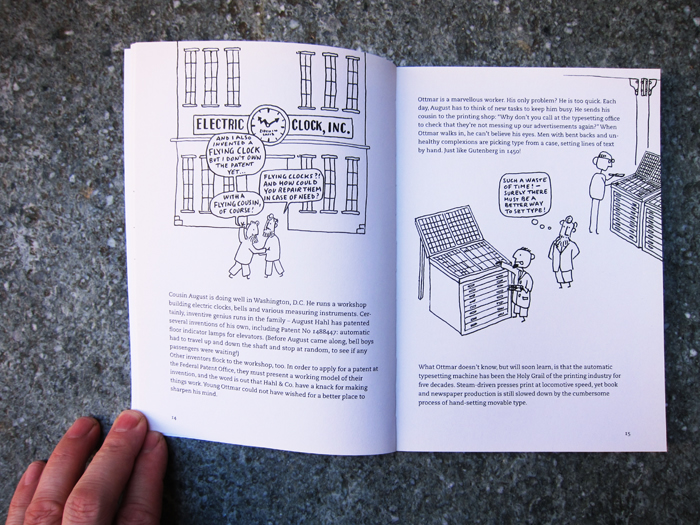 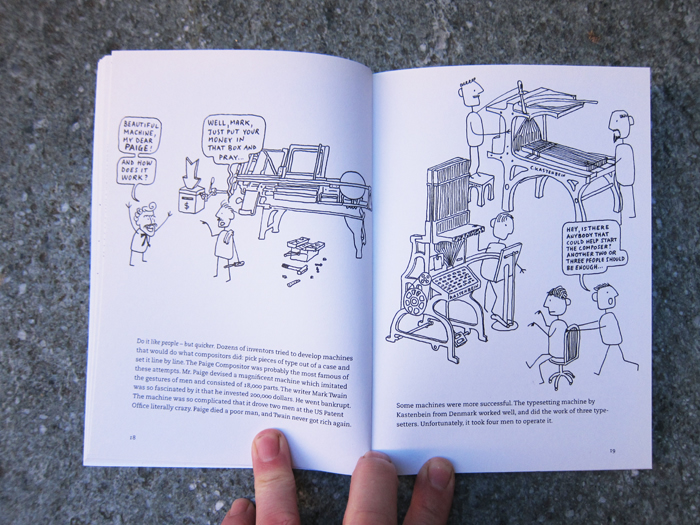 Many people were trying to create a setting machine, even the well known writer Marc Twain. 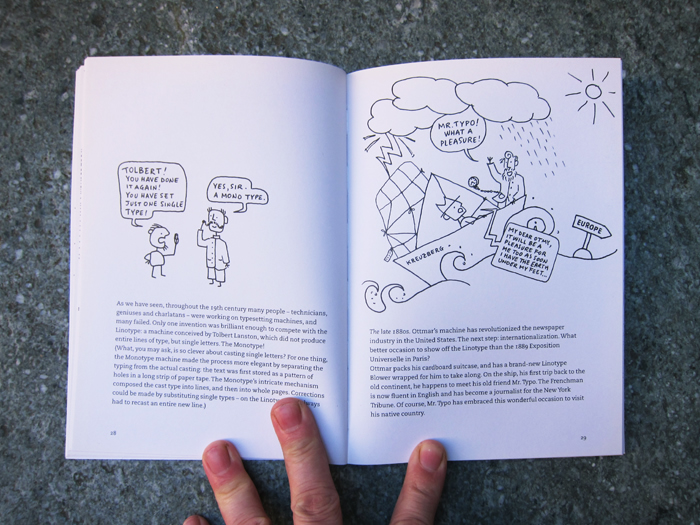 Ottmar coming back to Europe for the Paris World Expo 1889. 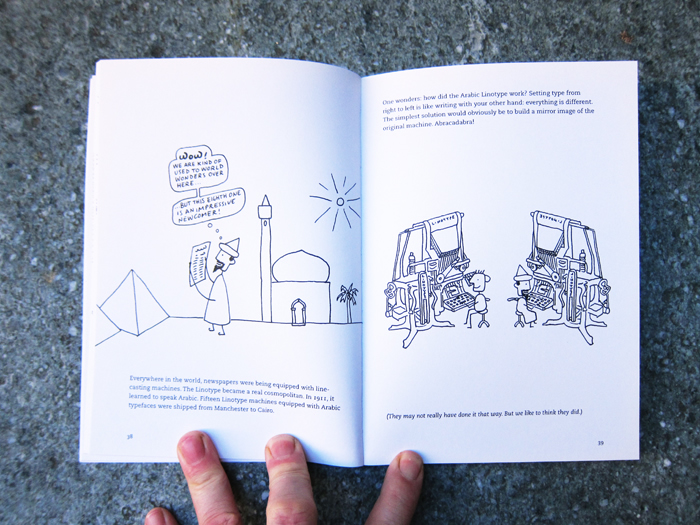 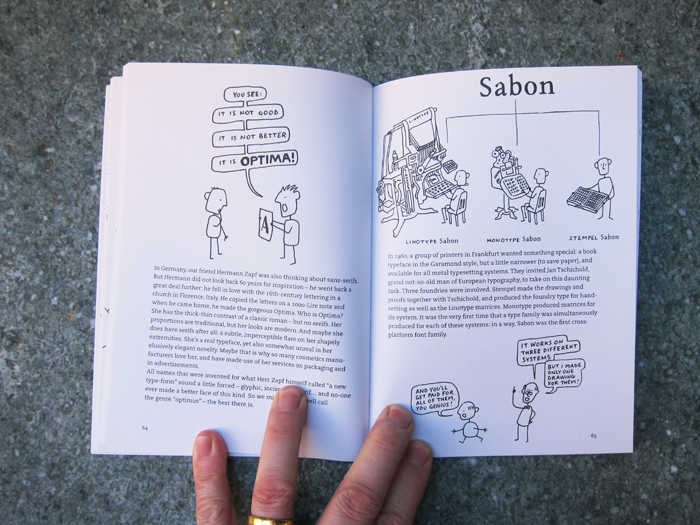 The Story of Optima and Sabon. 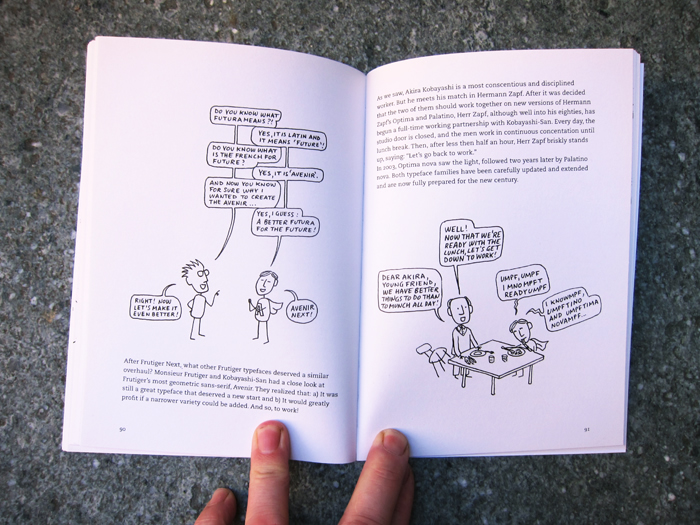 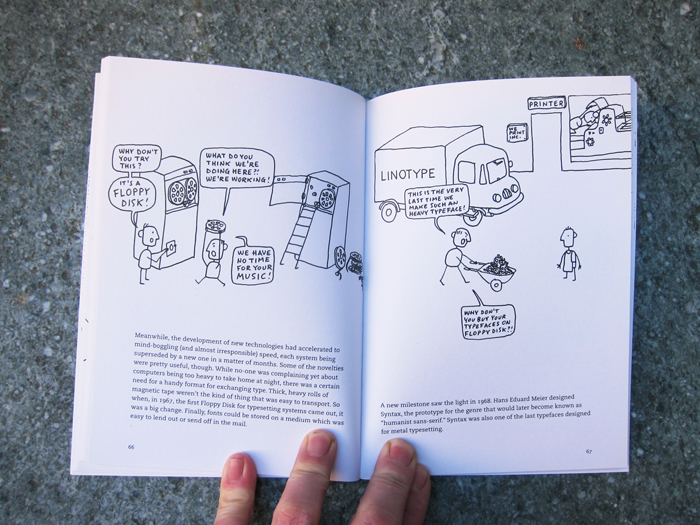 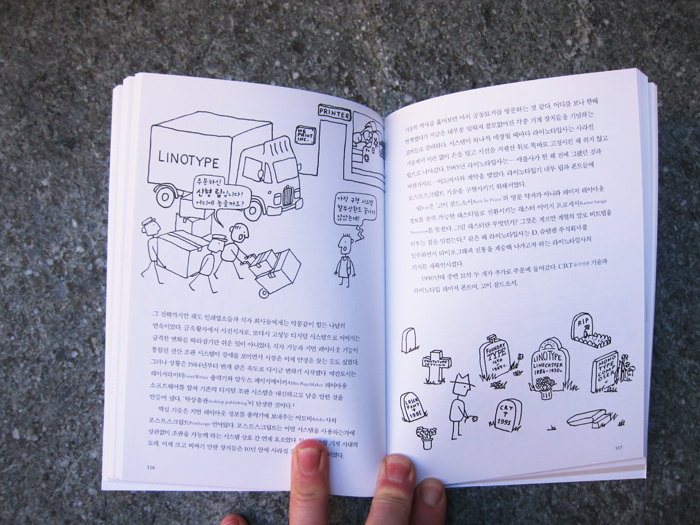 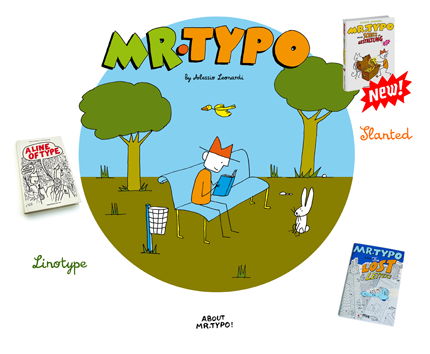 A Line of Type was the first apparition of Mister Typo. After this first strike he was involved in many other adventures. To know something more about this, please visit: MisterTypo.com.